Using the word Phobic to describe wall paper patterns may not be the most savvy marketing tactic as many would say it's most certainly doomed for failure. You may be thinking, who in their right mind would wall paper their home, office or business with "Phobic" wall paper. You could be right. On the surface, you may also think, it is down right insensitive to mess around with a person's fears or anxieties.

However, my intention is not to aggravate anyone who may be burdened with a phobia, but rather to approach the concept of Phobic Wall Paper as a broader concept that encourages reflection on the nature of home decorating, and interior design.

The digital patterns are created mainly from my collage work, but I have also experimented with other art work such as watercolor, mixed medium, mosaic and ink drawings.

After a period of time, I came to the conclusion that they were all, for lack of a better word, psychedelic, certainly many induce feelings of unease. Many of the patterns are created using collage that, you could say have phobic elements. The collage represents one's phobia which is hidden within the complex pattern, akin to the subconscious which you could say is hidden beneath the surface of reality. For example, the Bog Man series appears unsettling, but the reason cannot readily be identified because what provokes the unease or anxiety has been hidden within the pattern.

The patterns are a work in progress and are open to potential use for a variety of end products. 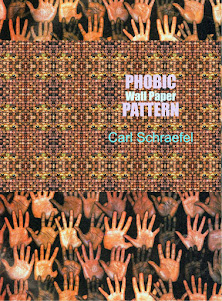 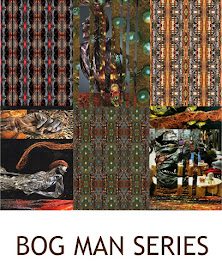