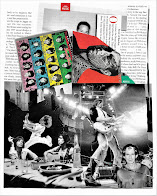 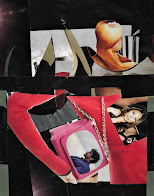 This magazine was the one to kick off this REMIX Collage challenge. I was able to produce 12 collages from this magazine. I would say for the most part, they turned out well. The magazine's paper has a good weight for cutting and pasting. The imagery was fun to work with and had an interesting variety. Looking back at the completed series, you can see a cohesiveness based on the color schemes; the saturation of colors along with a restricted color schemata. My favorites are the Rolling Stones, Gwen Stefani and the Academy Awards. Each collage is unique. There is a vibe and energy to them. I arranged the collages from most liked to least liked, from left to right.

There are two collages that I think miss the mark. The Game of Thrones castle backdrop is rather cliché and static. As if the neighborhood went to hell after the series ended. Some rich bastard bought the castle and renovated it. Now silly rich kids have moved in and the ghosts of past tenants have come out of the cracking foundation.

Although, I have to say that despite Meryl Streep being on the cover of Vanity Fair, she does not play a predominate role in any of the collages. Not sure why or how that happened? Sorry Meryl. I would reason that Meryl's 'other' head is a symbolic gesture about her uncanny ability to develop believable characters.